Waking up on Friday after work I felt like I had sandpaper stuck in my throat, great start ^^ With energy levels real low I started out by beating Ufouria (#77) early Saturday morning. It’s a good game and kind of a hidden gem for the NES. It plays a bit like metroid and the different characters you play as are fun. I got stuck once because of a glitch but I saved a bunch of passwords so it was fine. I just saw that I played this before, in 2015, and I have to agree with my past self…only having 10hp after dying is a bit ass. Lots of farming for life. Still a good game though 🦆

After some sleep it’s Saturday night and I feel even worse ^^ A friend comes over and we play through Turtles: Shredders Revenge (#78)with me constantly yawning …yeah, energy levels are below low at this point 😑 At least the game was good! Probably the best Turtles game ever and one of the best new-retro games I’ve played 🐢 It would be cool to get some people together and actually play 7 player co-op ^^

Wanting to pad the numbers a bit I ran through Turtles: Fall of the Foot Clan (#79) for the OG Gameboy. I died on the second to last boss so it actually took 45 minutes! Yeah, I feel kind of cheap playing games like this 😏

Now I need to get some sleep and hope that this cold fucks off. This year keeps being shit…at least I’m not having a fever AGAIN…knock on wood 😐

Played it before! It’s still pretty impressive for a 8-bit game and It’s good too! Give it a go ^^

Played it before! I managed to get killed by a ghost on the last level and the game froze…a dude in chat told me it was a known bug so, you know…AÀARGH!! Had to go to the gym and rage-lift before I could fin the chill to start the game over 🦏 It’s still a pretty sweet game for the Sega Master System and I’d recommend it to anyone who would like to get into the system ^^

The SECOND game I have not streamed on twitch this year. A friend had the Turtles Collection for the Switch so we ran through it in co-op ^^ Pretty different from Turtles in Time, even though they share a bunch of stuff, and not as good but worth your time if you liked that one. It was originally for the Sega Megadrive/Genesis but it’s one of the games I am missing in my collection.

It’s a platformer with Donald Duck in search for a great duck treasure! There’s some backtracking to find items that’ll let you progress so that’s pretty cool. As with most of the Disney games of this era it’s well animated, looks real nice and the gameplay is pretty good too.

Another 2D brawler with our favorite turtles!

I choose Leo and started playing…and then it was over in just ~20 minutes! :O Then I found out that there are different levels for each turtle x) And after you beat all 4 chapters (with 4 levels each) you unlock the final chapter. It’s one of those elevator stages that end with you kicking Shredders scrawny ass ^^

I can’t stand playing handheld games, it’s not comfortable to me, so I played it emulated with a PS4 controller! It did look a bit muddy but that is probably because this screen is ten times the size of the GBA screen 🦆

Anyways, the game is ok, not much else to say about it.

I thought “yes, Turtles 4 and Hyperstone Heist were great so I’ll try this gameboy game I have :D”…spoilers: It’s not as good.

You choose a turtle and walk to the right while flailing wildly at anything that comes at you and at the end of the stage you fight a boss. You have 4 tries (turtles) to beat the game and you can eat pizza to regain some life. That’s all, really.

It feels a bit choppy and slow but it’s playable. It’s a short one and I think it took me ~20 minutes or so to beat it :s At least the music and sound is good. I do like the gameboy sound chip 😁

It does have a level select but I don’t know why…did they think it was too hard so they put it in so that people could experience all the levels? It’s not like the game is hard :s Plus you miss out on some sweet cut-scenes if you skip to the last level 🙄

Oh and if you don’t play all levels in one go you won’t get the “good” ending, if you can call it that. After I took the picture and put down the phone Krang smiled and a question marked popped up after “the end”. Bullshit 🦆

Oh and I remembered to set my tv to 4:3 to get rid of that widescreen stretch x)

I have also played some Skater XL since it went 1.0 yesterday. I did all the challenges in an hour or two and after that it kind of ran out of content :s I know it’s a skateboard simulator and you are supposed to just skate around but some more content would be fun. It seems like the community is modding and adding new levels so I guess I’ll have to start modding if I want more stuff to do. Anyway, I don’t really know if I should count it as beaten since it just feels like a tech demo 😐 Don’t get me wrong, the gameplay is good and it feels nice when you finally land a treflip-overcrook-shove to fakie :p

No, this is not just Turtles In Time for the Sega Genesis! It does share sprites and things but it is its own thing. If you like Turtles In Time you’ll like this too, I’m pretty sure of it ^^

You can’t throw foot soldiers towards the screen, probably has to do with the lack of mode 7? There are a couple of new bosses that are unique to Hyperstone Heist though! Baxter Stockman in a flying machine that throws mousers at you and Tatsu who throws kunais (?) and has a bunch of foot soldiers fighting by his side.  Shredder is just as angry as he is in Turtles In Time, it’s the same fight but with a cooler looking background.

The music is top notch and works real well on the Genesis!

I played the game with a friend and we played on Hard because good ending and stuff ^^  I did however mess up the endscreen photos so this is the only one I have x) I wanted a picture of the screen with the time but my phone fucked up and all I got was table on that photo and then the screen disappeared 😦 I think it said 53 minutes.

Turtles in Time gets an extra point for having more bosses ^^

It’s a classic, probably the best beat em up on the SNES, and I have beaten it before but apparently I still have some friends that have yet to play this so we kind of had to ^^

We also played it on hard to get the best ending. We actually died on the last boss and got a Game Over so we pretty much played through it twice x) Yeah, I do feel a little bit ashamed… 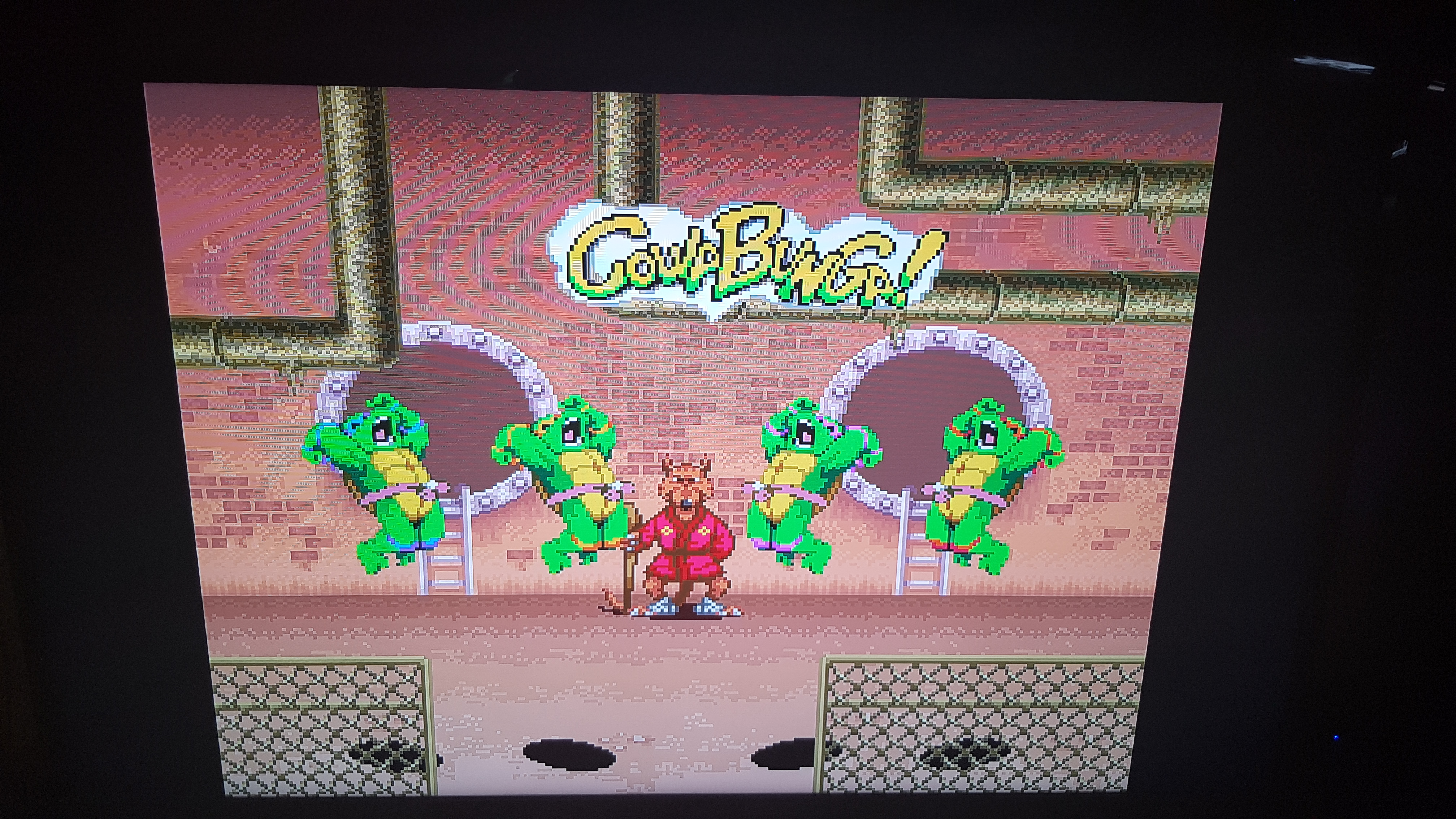 Yeah, this is made to eat your money in some fast food place, holy shit this is hard. I would have lost a good chunk of change 😀

Since I played the version on the Battle Nexus disc all I had to do was press “Y” to get more credits. Cheap, yes.

It’s fun tho and if you have 4 controllers you could play 4p co-op :O Cool stuff. Turtles 4: Turtles I Time is probably better and I have it on Mutant Nightmare for Xbox…so I should probably play that too ^^

Mutants in Manhattan is short, repetitive and lacks local co-op…wait, what? A Turtles game with no local co-op? That should be illegal! How the hell did this happen? :O Apart from that the game is fine, it’s short enough that you won’t get sick of it and it has a bunch of special attacks to unlock and upgrade so you won’t just spam “square, square, triangle” for 5 hours straight. It does seem to have online co-op but I do not have PS+ and I do not know anyone else that owns this game ^^

(googling) Yep, there is a super shredder and I am guessing you face him if you beat the game on hard 😡

I don’t like December, too much going on everywhere.

There are differences with this and the SNES port, music, enemies and the boss in the dino stage is some…well…glue-golem? (dodged that well, yes?) No Slash 😮

You don’t have to play for long before you realize that this game was made to make money off of kids in the late 80s/early 90s because HOLY HELL YOU DIE A LOT! Being able to press a button to “insert coin” makes this impossible to fail at, unless you shut it off ^^ I recommend agreeing on a number of continues and try beating it without pressing “insert coin” or it will just feel like a grind…unless you play with a friend! A beat em up is almost always more fun in co-op…almost…Battletoads -_-

I started playing Castlevania Chronicles, Original mode, and my sanity is quickly leaving me ^^ 16 “life-dots” but all enemies take 4 when they hit you…death in 4 hits 😀 Currently on the level with the werewolf boss…my anus is bleeding.